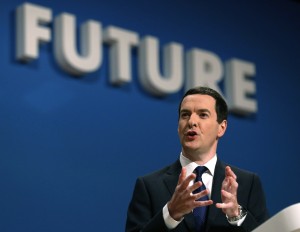 When Mr Osborne addressed the Conservative Party conference earlier this week, “We are the builders” was his most often repeated phrase. Among other things, the speech talked of investment in housing, in transport, and in the national infrastructure. He announced plans to give housing association tenants the right to buy, and we’re told that he’ll also be ‘sweeping away planning rules on brownfield sites’.

An article in ‘This Is Money.co.uk’ on 7/10 talks about some of the obstacles that the government might face when attempting to deliver on these promises, and I found it interesting that both Mr Osborne & the above article look to illustrate / support their individual view points by using a number of statistics that I’ve become fairly familiar with during recent years.

The National Housebuilders Federation quotes that (as a nation) we need to build 220,000 homes every year, which gives a target of 1.1 million houses in the next 5 years. The government has made claims that during this term of parliament they’ll almost meet that target, and build 1 million homes. Do I believe it? The answer is No. In the 12 months to June 2015 we built only 131,060 so (based on the current build rate) we’re only achieving 60% of annual target. At a meeting that I attended earlier this year with one of the large banks, a senior figure (who works closely with the ‘big name’ national housing developers) explained to me that they (the nationals) simply do not have the capacity or appetite to build 220,000 homes a year. Having recognised this, the bank believe that some of the shortfall can be made up by smaller operators, who have struggled (in the post 2008 world) to obtain necessary funding and lines of cashflow. The bank is actively looking for ways to support, and to work with, these businesses. However, it does not expect that (even if successful) they can / will deliver the 90,000 extra homes required to hit the target. In my opinion, if Mr Osborne can to deliver more than 800,000 units in the next 5 years he’ll have done remarkably well.

Planning rules are often blamed for stifling development and Mr Osborne talks of ‘sweeping away planning rules on brownfield sites”. Will this provide the answer? I would suggest probably no. As is well illustrated by the article in “This is Money” even though planners may approve a particular scheme, the local community may prove to be an insurmountable obstacle. Of the 195,000 homes that were granted permission last year, many are likely to be delayed or never completed due to local objections. The ‘NIMBY’s can prove to be a real headache.

Housing association tenants will be given the right to buy, and it’s intended that the money will then be recycled to provide funding for more houses to be built. Will this prove to be a kind of ‘magic bullet’? I’m afraid that yet again, I suspect that the answer is probably no. Just because you’ve offered it, doesn’t mean there’s a demand – how many people want it? What’s the uptake? Finally, and importantly, how much of the money will actually be recycled once you’ve removed the costs for administration and bureaucracy? If we are to try and predict what level of success can be achieved in this parliamentary term, then we have to allow for delays in timing. You could extend right to buy today, but for an application to be received, evaluated and processed could take approx.6 months. Therefore rate of progress / process will not meet the expectation. The first RTB policy was introduced in 1980 by a previous Conservative government, led by Margaret Thatcher. According to The Independent, between 1980 – 1995 more than 2 million homes were sold, but proceeds were not used to support the building of sufficient replacement social / affordable housing. This can be seen as a major contributing factor to some housing issues that we face today.

If rate of progress is an issue for both new build developments, planning, and right to buy, then perhaps a quicker solution would be to start building higher… i.e. take one area of land, requiring only one planning consent, that can be built quicker than most estates, but which houses multiple families. I recently returned from a trip to Singapore, where I stayed with friends who live on the 17th floor of a high rise condo, which contains a total of 136 apartments in a range of sizes. In addition to their lovely apartments, the residents benefit from fabulous facilities including gym, swimming pool, and party / banquet areas. If you look around much of Singapore, you’ll see that due to limited space, and rapid expansion, the answer is to go up rather than out. However, there seems to be limited appetite for this style of living in the UK.

We haven’t even touched on UK population distribution – Currently the areas of concentration for housing and development tend to be around large cities, such as London, Bristol, Birmingham, Leeds and Manchester. There are many more rural areas with lower populations where we have the space to develop, but there’s currently not the desire / demand to live there. Will we need to see a devolution of city based living, and a reduction of focus on employment centres? New and developing technologies can provide opportunities in the form of greater remote working, so could a shift in the distribution of accommodation be the answer? In part, I think yes. This can’t / won’t be the answer for everyone of course, dependent upon the job that you have. Occupations that could be termed ‘blue collar’ are likely to require attendance at work premises such as factories and warehouses, which means there’s a need to live nearby. The ‘white collar’ occupations are likely to be more ‘remote-friendly’, and could provide a choice to live where we want. Improved infrastructure, in the form of communications and transport links, would be needed to support this.

I believe that a mix of measures will be needed if we are to come close to addressing some of the accommodation / housing issues currently faced. As well as (previously mentioned) changes to infrastructure, we’ll need some changes to perceptions and attitudes too. Imagine if we did build some 25 storey high standard accommodation, on the border of the cities and towns, where they meet the countryside – We can go a long way to protecting the countryside, and just imagine the views!!

Mr Osborne said in his speech that work has already begun, and we’ll have an ‘Independent National Infrastructure Commission’ to be led by Lord Adonis, and I shall be eager to see the steps taken and the feedback given. Of course this work will take time too, which makes me think that perhaps ‘We are the builders’ was inaccurate, and Mr Osborne should have said ‘We want to be ..’. After all, it’s a good thing to demonstrate aspiration, and it’s a powerful quality when mixed with some necessary realism.