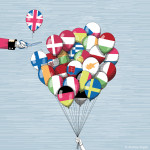 Today I’ve received several communications from clients who, following the EU Referendum last week, are asking the question ‘What Happens Now?’ Within that broader question, there are smaller details to consider … Will the number of mortgage products available reduce, will the Bank of England need to raise interest rates, will the value of houses reduce, and what does this mean for individual mortgage payments?

As you might expect, like many others, I have spent a considerable amount of time during the weekend keenly watching events unfold, and also reading a number of articles / opinions about what can be expected in a post-Brexit-vote-Britain. I’m afraid that I have come to the conclusion that I don’t know, and I don’t think that anybody really does.

Without a crystal ball available, it’s simply much too early to tell at this stage what the future holds. I can (and I’ve decided to) share below some of the thoughts of a few other experts whose opinions I respect, and offer some reassurance that there are positives to be found out there.

“Eyes will be focused on the Bank of England and its reaction where interest rates are concerned. In the short term there could be a base rate cut, meaning mortgage products should retain their current low rates, and there will be much for borrowers to take advantage of.

That said, it is important for buyers to remember why they are purchasing a property. In most cases it should not be deemed a short-term investment.

It is too early to speculate about house prices and, while they may ease slightly, the underlying fundamentals of people needing a home and the current lack of supply remain. If sterling continues to weaken, however, foreign investors may seek to take advantage of this market again.

In the lending market, banks are much better capitalised and, having repaired their balance sheets in recent years, will still be looking to lend. For the most part, there is no reason to think it will not be business as usual. The BoE has also made clear it will do whatever it takes to assist where necessary.”

“In the short term, people’s attention will be on interest rates and what impact this will have on mortgage costs. While markets are bound to react to the news, the question will be how long it takes for them to settle. We know the authorities will be mindful of this … Lenders remain open for business as usual. Mortgage pricing is unlikely to react instantly, although pricing may be affected in the foreseeable future because of the effect on lenders’ cost of funds arising from the perception of economic uncertainty.”

“Nothing has changed and it won’t for a long time because we’ve got at least a two-year process to go through to exit. I also don’t imagine that the mortgage market will change radically in terms of fund availability because banks are still going to want to lend and are being encouraged to lend. I don’t anticipate much change in the short term.”

“There are two scenarios the banks are running through,” he says. “One is negative interest rates; the other is base rate increases. The decision… will be driven by how everything reacts over the next two to three weeks. There’s initial shock, then things will settle down, then we’ll begin to see the outcome of this.”

Meanwhile the body has rebuffed claims that house prices could fall as a result of the UK’s decision to leave the European Union.

In its market commentary, Mr Jamei said while he expects activity levels to fall below “what would otherwise be expected” in the near term as a result of uncertainty, house prices will not be significantly impacted.