It’s been hit and miss recently as far as weather’s concerned. Hopefully you’ve topped up the tan on the good days, and found an umbrella close to hand on the wet days!! As the exam season is finishing, and schools close their gates for 6 weeks, we’re keeping fingers crossed for sunny days when we can get the BBQ out, and school age children won’t be trapped indoors. Already the longest day of the year has passed, and it seems like a good time to have a look back over the last six months. 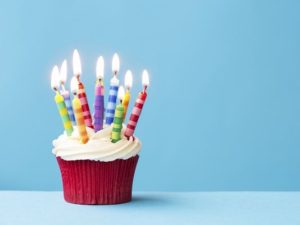 I can’t fail to notice that it’s been a six months filled with anniversaries, births (we’ll come on to that) and momentous occasions. Let’s start with both Sir David Attenborough and the Queen turning 90! That’s quite an achievement, and it’s amazing to think that 90 years ago the average house cost £6001, which is about what you’d pay for a homebuyer survey now!

I also can’t ignore the biggest voter turnout of a generation, when 72.2% of the electorate expressed a preference in the EU Remain/Leave Referendum2. When 51.9% voted to leave, the next chapter in UK history began. There have been conflicting views expressed about the expected impact on the economy, on jobs, house prices, and interest rates. All that appears to be certain is the uncertainty!! The coming weeks and months should bring greater clarity, and (like you) I’ll be watching intently as the dust settles, and negotiations take place.

Moving Experience celebrated its 9th birthday in May, which makes me really proud on a personal level. During that time we’ve helped hundreds of you to secure mortgages, to protect your families, and built up some fabulous relationships along the way, so thank you! Amazingly it’s also three years since we took our office space at Aardman Animations. There are no other Mortgage & Protection businesses that can offer the opportunity to rub shoulders with Shaun the Sheep, and Wallace & Gromit when it’s time to come in for your mortgage / protection review!!

As we head into another year in business we’ve launched a new website, which should be easier to navigate, so do pop over and have a look. It’s quite a task re-evaluating your own website, but our new baby has now been born so to speak. The last and, for me, the most important birthday came on 22nd February, when my second son Harry arrived. He’s doing great, and I want to say huge thanks for all the lovely messages that I received.

If you’re planning a holiday soon then have a fantastic time. Yvette recently returned from Glastonbury (we’ve only just got the mud off her), and I’m taking the family to the USA in October. Will, who recently completed his professional exams, is hoping for a well-deserved break in Cuba.

P.S. Following the success of our first ‘Jessie May Kart Grand Prix’ in October last year, we’ll be doing it all again on 22nd September. If you’d like further info, or to book your team, please give us a buzz.