You probably saw that Mark Carney, the Governor of the Bank of England, announced a reduction of UK base rate to an all-time low of 0.25% last week. This cut was the first change to base rate since March 2009. In this blog we take a look at how the mortgage / housing industry has reacted, and whether there are savings to be made, as well as having a look at what’s in the news for Bristol this month.

It was reported in the Guardian that the interest rate cut was as a way of stabilising the economy as part of a post-Brexit four-point-plan, and an attempt by the Bank of England to stabilise the job market, international trade, and high street spending. The cut was not necessarily aimed at motivating the housing market. Having said that, Mark Carney was at pains to ask lenders to pass on the cut – but as yet not all have. There are around 1.5 million properties that have tracker products, and a further 3.5 million with other variable rate mortgages, whose owners could see a benefit, but a great many of the latter are at the mercy of their lenders. Some providers have revised fixed rate product ranges, but this hasn’t been universal for a couple of reasons (a) Firstly, the change was expected and would have been ‘built in’ to some offerings prior to 4th August (b) Bank Base Rate is only one of the factors that influences how mortgage products are priced.

As the Telegraph reported, whilst some new mortgages appear become more affordable, it may not make life any easier for first-time buyers with the real issues of saving for deposit, affordability, and property availability still being there. And, as I type today some of the biggest lenders are still to confirm if and when they will pass on the cut to customers. 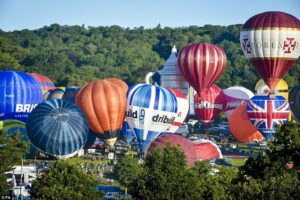 Sam Barker’s opinion piece in Mortgage Strategy hinted that whilst in the short term the cut wouldn’t benefit the vast majority, he believes that in the long term we could see the reduction benefitting remortgage customers and bite into competition between lenders. Sam did note that for first time buyers it wasn’t a totally rosy picture, because lenders have to ‘stress-test’ borrowers at 3 per cent above the prevailing rate to ensure affordability, which prevent them from offering higher loan amounts. Capital adequacy requirements are also a deterrent for some lenders, from providing loans to those with smaller deposits.

We will of course keep monitoring industry reactions and developments, and if you feel that it’s time to review your mortgage please get in touch in the usual ways.

On a more uplifting note (sorry, couldn’t resist!!) Bristol’s skies will be lit up this weekend as it is the 37th annual Balloon Fiesta, which is thought to be the largest in Europe. Expect to see a Minion and a giant Dragon alongside more traditional balloons. It’s completely free to attend and a favourite in our office is the Night Glows. Depending on the weather of course, my partner and I are hoping to make it one of the early morning ‘mass ascents’. However, I can’t help wondering if trying to organise ourselves and two boys under the age of 3 to get to an event at 6am may be somewhat ambitious!

With a calendar of free activities across the city all summer it is no surprise that Bristol was recently voted as one of the top ten cities to live in the world, putting it alongside New York and Barcelona. But it seems that popularity comes at a price, with the price of the average Bristol home continuing to rise, and now exceeding £250,000. The Bristol Post reported that as house prices have slowed in some traditional hot spots, like London and Brighton, Bristol is bucking the trend. It remains to be seen if Brexit or the interest rate cut will take the sting out of Bristol house prices.

Image from – The Daily Mail.