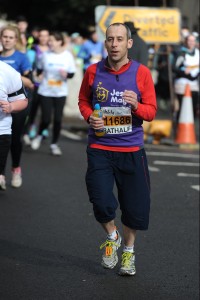 Phew…. We did it!! All three of us completed the 13.1 mile circuit of the Vitality Bath Half Marathon on Sunday 1st March – I’m proud as punch of my team, for both taking on the training and the challenge, and of what we achieved in our first fundraising event for Jessie May.

There was a really great atmosphere on a bright and sunny Bath morning, and despite the chilly wind the response from all the supporters who cheered us along the course was more than helpful in keeping us going. I began to get a little concerned ‘en route’ as I was passed by a Rhino, a Chicken and a couple of ladies wearing giant inflatable boobs! (in support of the Coppafeel charity.)

I knew I wouldn’t be quickest when Will, who was the last of us to cross the start line, had caught up with me around mile 7. After we had a little chat, he motored on to the finish (also catching and passing Yvette) to post a great debut half marathon time of 2.16.44. It’s amazing what people can achieve with the promise of a large steak meal for lunch!

I followed him over the line shortly afterwards with an official time of 2.33.23 and Yvette – who admittedly had to stop a few times for ‘comfort breaks’ – posted a very respectable time of 2.35.47. Unfortunately, I didn’t complete in under 2.5 hours as I’d originally hoped, but on the upside, at least I could still walk at the end, unlike Yvette who had to get a piggy back to the Bus Stop from her boyfriend!

The encouragement and support on the day from our nominated charity Jessie May was fantastic – with some particularly delicious cupcakes giving us an energy boost after our efforts. Overall there were 16 runners participating for the charity, who have so far raised over £7,500 to help support families with terminally ill children in Bristol, Bath and surrounding areas.

Our current fundraising total for Jessie May stands at £1118.75 (inc gift aid) and we’d like to say a huge thank you to all those family, friends and clients who donated to this worthy cause.

We’ve now got our thinking caps on, and we’ll be dreaming up other exciting events to raise further funds for the charity who we have agreed to support (as part of the Caring @ Work Scheme) for the rest of 2015.

If you’d still like to donate, you can. Please go now to the page http://uk.virginmoneygiving.com/movingexperience before it closes to donations on 9th March.